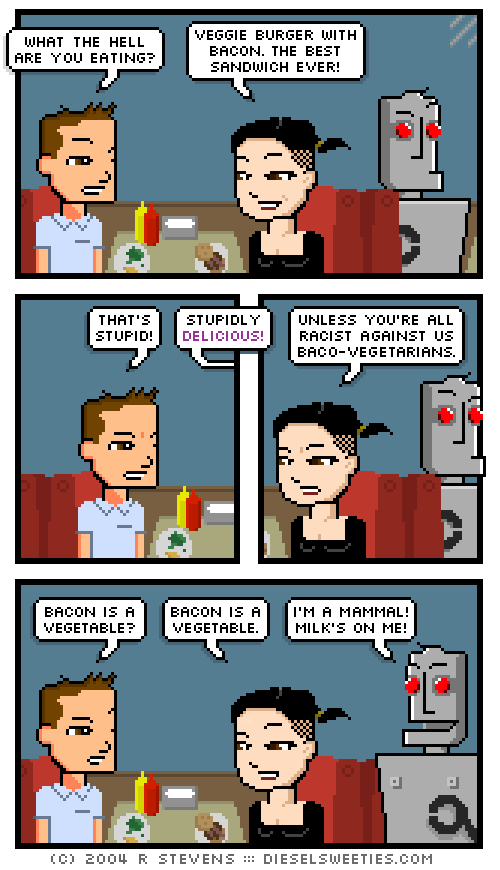 I explained the true nature of bacon in 2004 before it was a cliché.

I’m posting older comics at noon this month in honor of doing this dang comic strip for 18 years.

eraycollins
reply
I'm nurturing my second "Bacon is a vegetable" t-shirt which I obtained at Stevens' closeout sale. I usually wear it when I go grocery shopping. It remains my most remarked-upon t-shirt

Suggest having this strip at hand when reading Cathy O'Neil's book, Weapons of Math Destruction.

Instead of algorithms it should be machine learning of course.
Seattle, WA

chusk3
reply
My life in a nutshell
Austin, Texas

alt_text_bot
reply
"We TOLD you it was hard." "Yeah, but now that I'VE tried, we KNOW it's hard."

I’m usually pretty particular about the sorts of traits that get assigned as humanity’s “special thing” in sci-fi settings, but I have to admit that I have a weakness for settings where the thing humanity is known for is something tiny and seemingly inconsequential that it wouldn’t normally occur to you to think of as a distinctive trait.

Like, maybe we have a reputation as a bunch of freaky nihilists because we’re the only species that naturally has the capacity to be amused by our own misfortune.

Alien: Why are you happy? You’ve been seriously injured!

Human: *struggling to control laughter* Yeah, but I can imagine what that must have looked like from the outside, and it’s pretty hilarious.

Captain XXlr’y: First Officer Jane The Human, your olifactory protuberance is severely damaged! Why is this a matter for mirthful celebration???

First Officer Jane The Human: A SPARKLY LITTLE POMERANIAN THING WITH A GODDAMN UNICORN HORN CHASED ME STRAIGHT INTO A WALL! OH MY GOD! DID YOU SEE THAT? I RAN STRAIGHT INTO THE WALL.

Captain XXlr’y: Yes I just observed this sequence of events! It was terrible!

First Officer Jane The Human: OKAY WHO GOT THAT ON CAMERA, I WANNA SEE.

Captain XXlr’y: So you more fully understand that this is a situation you should never get into again?

First Officer Jane The Human: SO I CAN SEND THE VIDEO TO MY MOM!

Captain XXlr’y: For… for the solicitation of maternal concern…?

First Officer Jane The Human: NO, BECAUSE SHE’LL THINK IT’S HILARIOUS TOO.

Sidetrack but: I am of the opinion that we will be known as the Throwers. The biomechanics of our shoulder joints, which allow us to hurl things farther, faster, and more accurately than any other animal, set us apart almost as much as our intelligence. And indeed our dominance as a species on Earth has a lot to do with applying that intelligence to throwing more better.

When the aliens come visit via seventh dimensional space fold like sensible people, I can only imagine their reaction when we ask them to point out where they come from so we can fling our ambassadors at them.

That would be fascinating. Imagine if, for whatever reason, they were simply very badly adapted to throwing, and never picked up the habit. And the first time they saw someone toss a thing to someone else, they’d just be like “why did you … drop that thing sideways?”

oh my god that’s fascinating. imagine a bunch of alien species that never evolved a socket joint. like, tentacles or hinges, that’s it. maybe some pivoting paired bones like our radius and ulna. then we show up and we’re like ‘haha watch this’ and windmill our arms and the Zygosian ambassador gets really grossed out.

later some aliens are like ‘so, as remarkably throwy guys, what’s your opinion on this mathematical acceleration experimentation tensile device one of our philosopher kings recently invented?’ and show humans a little desk-sized catapult.

Heeeee I do like the idea of a tiny catapult.

eraycollins
reply
They don't call it throw weight for nothing.

reply
This is delightful. I'd read all these books. The post Too poor to live. appeared first on Indexed.

Unfriendly fucking reminder that the best predictor of mass shootings is not mental illness, but being an angry young white man who has recently experienced rejection and has easy access to guns.

Bringing this back because it makes terrible people angry. And I’ll add a note to all the people saying “But you’d have to be mentally ill to do that!”: Mental illness is, by definition, abnormal. Does “mediocre white boy is so entitled that he resorts to violence when told no” really sound particularly unusual to you?

I devoted my entire graduate studies and thesis on mass school shootings, multiple murderers, and criminal psychology and I can tell you that this is in fact completely true and is suported by an unbelievable amount of emperical, quantifiable data that I slaved over for years. 💯

Exhibit 15372 on why Trump won: Hypocrisy. Stereotypes are bad, except when applied to white males. I don't care if you're right, you're alienating a lot of people, and you won't win the culture battle that way. Use some tact. The post OH GOD IT IS ALL TRUE appeared first on Indexed.